Tintern Grammar gets centred about STEAM

When Tintern Grammar’s new STEAM Centre officially opens next year it will provide a much-needed home for a STEAM culture that’s already nicely on the boil at the East Ringwood, Melbourne school.

Students and teachers alike will be encouraged to use the centre in an informal way, the idea being that they will be free to explore, perhaps fail, and then find their own way through challenges; the result being rich, cross curricular learning experiences.

Informality will be encouraged regarding The STEAM Centre but some very thorough and considered background research went into how STEAM teaching was going to be done at Tintern Grammar.

The school began the process slowly, taking two years to investigate their ideas around STEAM.

“We’re trying to forge into areas where there is no certainty or data necessarily … in some ways we’re taking the approach, as my father would say, of ‘suck it and see’”, says Principal Brad Fry.

Fry, who has been instrumental in the project, says that action research across three of the school’s age groups informed Tintern’s Grammar decision to green light The STEAM Centre.

“We ran coding, robotics and some mechanics and electrical circuitry which we began at three different sections of the school. One project related to Prep to Year 2 students, introducing the elementary units of coding, a little bit on circuits and some mechanical engineering, or what used to be known as Meccano. We wanted to see if we could teach this down at the very youngest age group.

“The greatest enthusiasm, following initial apprehension, was within the staff after watching the kids at work.

“The second and third part related to robotics, we enhanced a program that was already up and running with our upper primary students, made it more complex and fed it into the other parts of the curriculum. This was to see whether we could teach other subject areas through robotics, which students find very engaging.

“The third part was in our middle school where we were looking to create an entry into the Robocup. We have a parent who has a lot of experience in the event and he ran the program as an after-school activity. We had the same kind of response from staff that we had with the younger students; they got really interested,” Fry says.

These activities ran alongside art and design based 3D printing and laser cutting for Tintern’s senior secondary students taking on VCE and IB.

“What has become apparent is that bringing these things together enables students to take something from the genesis of an idea into a finished product which brings a whole lot of cross curricular and capability skills together into a single task.”

While it’s early days yet, Tintern Grammar’s STEAM initiative has already given rise to some interesting and unexpected developments. One student has evinced Scandinavian DNA producing a model flat packed table with the school’s CAD design and laser cutting machine while entries for the Robocup continue apace as students nut out how to program a robot to retrieve material in a mock emergency rescue scenario. Even the school’s youngest are busily learning code alongside basic numeracy and literacy. 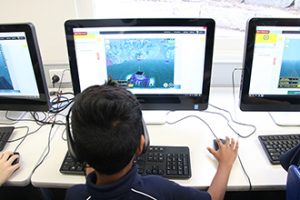 When planning the new space Fry and his staff were aware of the speed of development within tech, which was a challenge when they were thinking about equipment for the new centre.

Foremost, Tintern Grammar is setting up a space that will be appropriately resourced, there will be a second laser cutter, a commercial 3D printer and a number of computers with data logging software, all of which will allow students to go to the centre and explore their own ideas, assisted by staff on hand who will be running passion projects.

“We have staff who are very interested in virtual and augmented reality so we recently partnered up with a company from England and bought a set of latest evolution virtual reality headsets and I think these will find use in the history curriculum and the language curriculum.

“The ability to turn a big idea into something that is tangible will be what students need in their capabilities beyond school.

“We’re trying to see if we can effectively train and develop innovation skills and creativity skills together with a positive attitude to risk taking; a project might fall part, what can you learn when it does?”, Fry says.

There won’t be formal STEAM classes at Tintern Grammar, rather the centre will be used to crystallise what’s being taught in the curriculum, Fry sees the most obvious applications in Middle School History, Science and Geography teaching.

“We have a cohort of teachers in the Middle School who see the centre as a real opportunity to augment what is being taught. I can also see the centre being used as an after-school club and a space where we can run a number of our activities,” he says.

Tintern Grammar is long on professional development and has anointed Sue Healy its Director of Information & Technology Services as the go to person as staff requests for PD come in.

“When Heads of Department have requests for training come across their desks they are funneled to Sue Healy and she can point them to PD activities. Our training follows the same model as the centre itself in that it needs to be agile and it needs to be responsive.”

Fry says that opening lines of communication between Tintern Grammar and other schools taking on STEAM has been useful.

“I’ve visited schools like Lauriston who have a leading FabLab and I recently visited New Zealand to visit the fantastic Makerspaces there. We are running small half-day programs where we invite other schools to come in and have a look at what we’re doing.”

Fry says that the knowledge sharing is viral in nature, teachers often come back from events with ideas about approaches and products that could be put to use at Tintern Grammar. 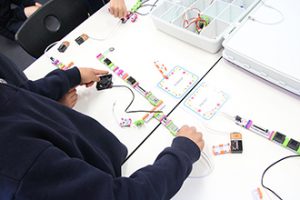 The centre will introduce a new kind of collegiality at Tintern Grammar as students and teachers explore STEAM together, learn what they can do and to all intents and purposes embark on a new paradigm of learning.

“The staff are learning with the students and are enjoying it almost as much as the students are. It’s not something you would be taught at University, so the professional learning and growth side of it for the staff is fabulous,” Fry says.

“We have students that have never done this before and we see them come in and light up like a Christmas tree. We want to give them the opportunity to explore their ideas further.”

Assessment of the centre’s success will be made through annual reviews of teaching and testing student knowledge where the facility has been used to augment the curriculum. Tintern Grammar also wants the centre to be open to the local community.

“Community engagement is a big part of what we do, we’re hoping The STEAM Centre will be part of that, it’s a case of ‘build it and they will come’, if the community does embrace the centre we’ll see it as another mark of its success.”

Thank you for your support – Volunteer Thank You Evening